The Department of Biochemistry, University of Kerala is indebted to Dr. P A Kurup, its founder Head for building the discipline of Biochemistry in Kerala. He left this earthly abode, on21-6-2016, at the age of 89. Six and a half decades of his research career can be divided into three parts. The initial phase was the building up of the academician in him, which fully blossomed in the second phase as the Professor and Head of the Department of Biochemistry University of Kerala, and the third and last phase – his post retirement years – as Director of Metabolic Disorders Research Centre (MDRC), Trivandrum.

He was born on December 7, 1927. He graduated in Chemistry, from the University college, Trivandrum and pursued postgraduate degree in chemistry with specialization in Biochemistry in 1948. His research in the IISc Bangalore focused on the isolation and characterization of antibacterial principle of Moringa. On the award of PhD degree in 1953, he joined the Central Research Institute in Jamnagar as Biochemist, where he continued biochemical investigations on medicinal plants. In 1961, he returned to Trivandrum and joined as Reader in Biochemistry in the Department of Chemistry, University of Kerala. The administrative skills and vision of Dr P.A. Kurup paved the way for the formation of a separate wing for Biochemistry in the Chemistry Department in 1964, which later blossomed into a full-fledged Department in 1970. Under his guidance and leadership this department bloomed into a nationally and internationally acknowledged centre for atherosclerosis research. He was also instrumental in the construction of a separate building in the Kariavattom Campus, with ample space and well-equipped laboratories in 1984. The building layout was conceived, meticulously planned, designed and constructed during his tenure. Now this has become a leading centre for biochemical education and research.
During the early days of his career, his research cantered on active principles in medicinal plants. He pioneered programs to determine biochemical constituents in ayurvedic preparations. Later this became one of the major activities of the Ayurvedic Research Centre established by Government of Kerala.
In 1966, he worked for a year in the Imperial College London under the Colombo plan. The turning point in his research career was his stay in London. The academic interactions with various scientists and with his physician brother, sowed the seeds of interest in atherosclerosis and cardiovascular complications. His group investigated mainly on two aspects ,1) metabolic changes in arterial wall due to disease and 2) impact of various micro and macro nutrients, and dietary fibre on the development and regression of atherosclerosis. The hypolipidemic effect of black gram protein and fiber, is one of the major outcomes of his investigations. A patent was also born out of these investigations in 1973. ‘Method for the manufacture of a protein and polysaccharide fraction from black gram’.
His interest in fibre culminated in collaborative research work with one of the leading universities in the world. (e.g.,John Hopkins University, USA). An epidemiological survey on dietary habits, life style, age and blood parameters in human population was also initiated. The extrapolation of his investigations culminated in the production of a processed food made from black gram, ragi and wheat bran which could reduce cholesterol and triglycerides in hyperlipidaemic patients. More than 50 students earned degree of Ph.D., under his guidance and his publication tally stands tall at 400 papers in peer reviewed national and international journals. He continued as Professor and Head of the Department of Biochemistry until his retirement in 1987.
After an excellent career in teaching and guidance he joined as a consultant in Regional Research Laboratory, Trivandrum (1992-94). He served as Head, Department of Biological Sciences, R& D, Terumo Penpol Ltd, Trivandrum during 1995-99, and was later promoted as Director of this division (1999-2003). His passion for research and leadership qualities prompted him to launch an independent Research Centre, MDRC in 2004 and continued as the its Director until the very end. During this phase he was influenced by his son who was a neuro physician to work on various neurological and metabolic disorders. This centre has now developed into a diagnostic and research centre for various metabolic disorders.
The introduction of biochemistry courses at undergraduate and post-graduate levels in Kerala was initiated by him. His expertise was utilised for the formation and development of many research organisations like Rubber Research Institute, Ayurveda Research Centre and for the formation of many administrative protocols in the University. He occupied many important academic positions like Dean, Chairperson of Board of Studies, and Vice president of Indian Society for Atherosclerosis Research (ISAR).
His contributions for the establishment of ISAR and atherosclerosis has been recognised by the installation of Dr P. A. Kurup oration award for basic research in atherosclerosis by ISAR. Society of Biological chemists has instituted Prof P. A. Kurup endowment award from 1991 onwards. Department of Biochemistry and its alumni have instituted a Prof P.A Kurup Memorial lecture from 2017 onwards in recognition of his glorious contributions to the Department of Biochemistry

The University of Kerala has secured an A ++ grade from @NAAC_India, giving a fresh impetus to the higher education sector in Kerala. This is the first time a university in the State has received this recognition. Congratulations to all who have made this achievement possible. Retweeted by BhaktoKaBaapChaiWala

The University of Kerala, a public university funded by the Government of Kerala (GoK), received the highest grade of A++ in NAAC Accreditation. Congratulations to the Vice-Chancellor & team. Recognition bolsters GoK's plan to achieve a major leap in Higher Education in Kerala.

In a historic achievement, the University of Kerala has obtained an A ++ with 3.67 grade points as part of the NAAC accreditation. This gain stands testament to the Kerala government's unyielding efforts towards improving the quality of our universities. Congratulations! 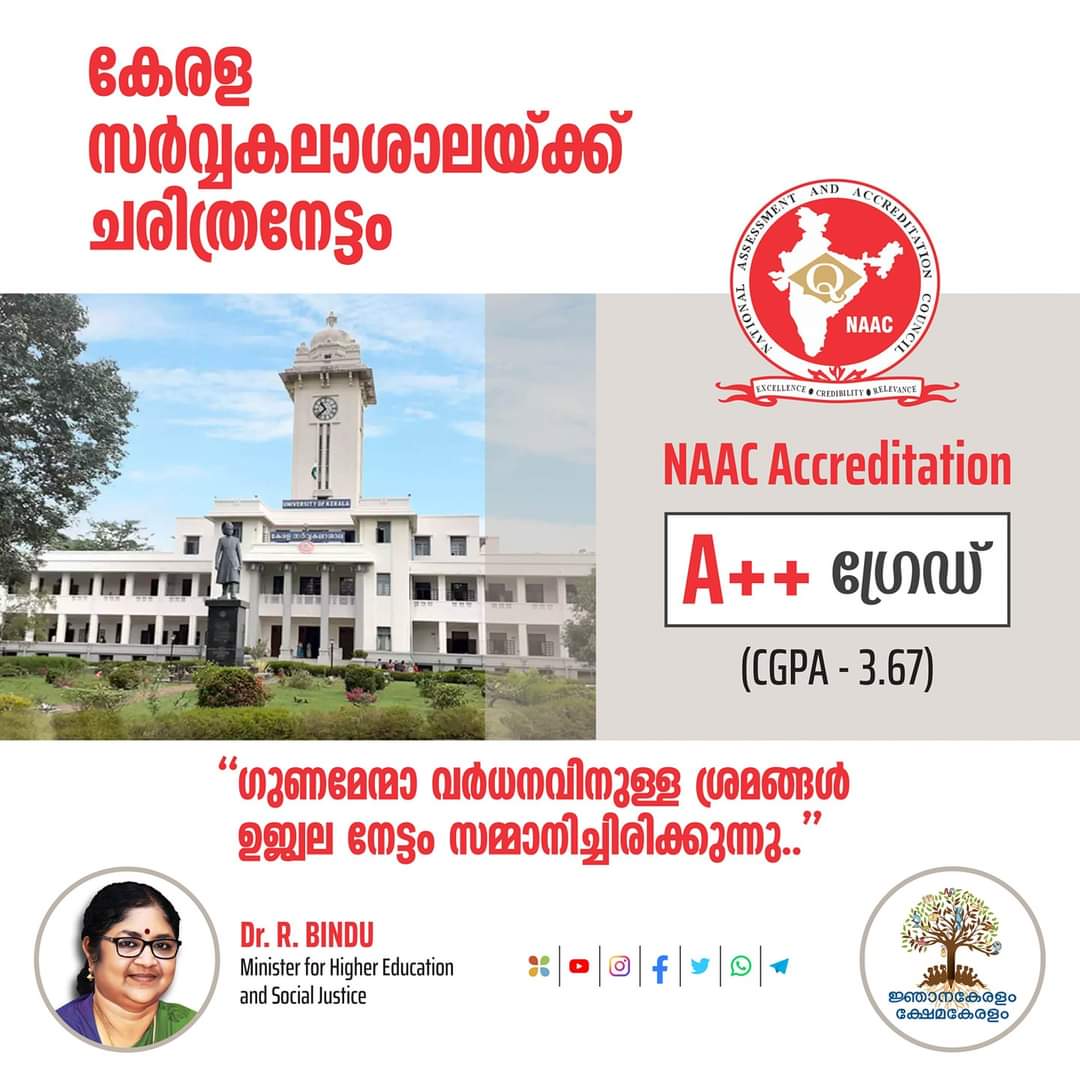 The University of Kerala has secured an A ++ grade from @NAAC_India, giving a fresh impetus to the higher education sector in Kerala. This is the first time a university in the State has received this recognition. Congratulations to all who have made this achievement possible.